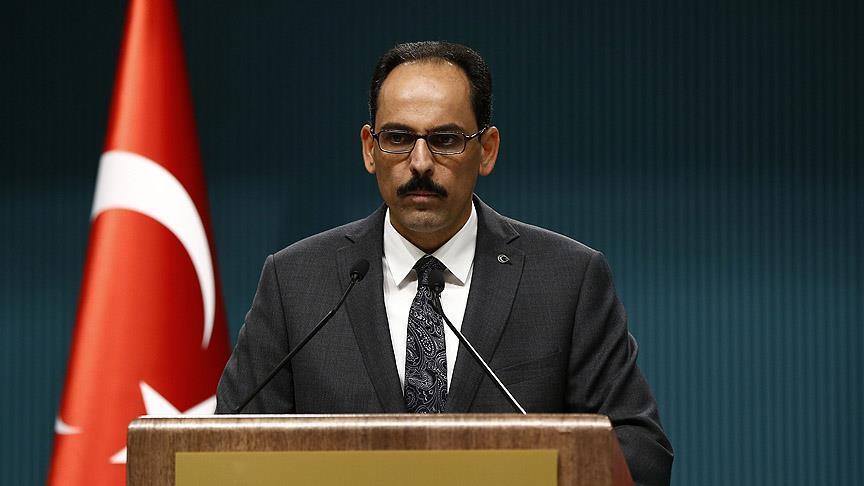 Ankara Wednesday has once again criticized the measures taken against Qatar by the several Arab and Gulf countries saying the sanctions did not help solve the crisis.

"The measures taken against Qatar are indeed disproportionate and do not contribute to the resolution of the crisis," İbrahim Kalin, a top aide to President Recep Tayyip Erdogan, wrote in a column for Turkey's Daily Sabah newspaper, "The Qatar crisis, Turks and Arabs".

As the crisis has entered its third week, Kalin said: "Qatar stated that it shall not hold talks until and unless the blockade is lifted. Saudi Arabia and the United Arab Emirates should heed this call and lift the blockade in order to begin the process of dialogue and negotiation."

The presidential spokesman went on to say that all parties should work collectively and coordinate in line with the spirit of unity and fraternity.

"But it should be clear by now that this recent crisis is more than about terrorism charges. It is also about how to deal with political Islamic movements, i.e., the Muslim Brotherhood and Hamas."

The five countries have indeed accused Doha of supporting the Muslim Brotherhood and Hamas in particular.

Kalin said the Muslim Brotherhood had distanced itself from violence.

"In Egypt, where the presidency of Mohamed Morsi was brutally crushed by a military coup led by General Abdel-Fattah al-Sisi the Brotherhood did not resort to violence."

In 2013, Mohamed Morsi -- Egypt’s first freely elected president and a Muslim Brotherhood leader -- was ousted and imprisoned in a bloody military coup.

Kalin said that accusing Hamas of terrorism did not make sense, adding: "Hamas is part and parcel of the Palestinian society and its movement to end Israeli occupation."

"Turks and Arabs are brothers and sisters, friends and allies, neighbors and partners, and must work together for a more secure and brighter future of the Arab and Islamic world. The differences of opinion should never be a cause for vicious cycles of blame, mistrust and smear campaigns."

"Media wars do not help anyone. We should all be vigilant against any attempts at wasting our intellectual and political resources in self-defeating rivalries and proxy wars.

"Instead, we should focus our energies on generating mutually empowering environments and win-win situations for all," he said.