US Senator to halt arms sales to Saudi-led states 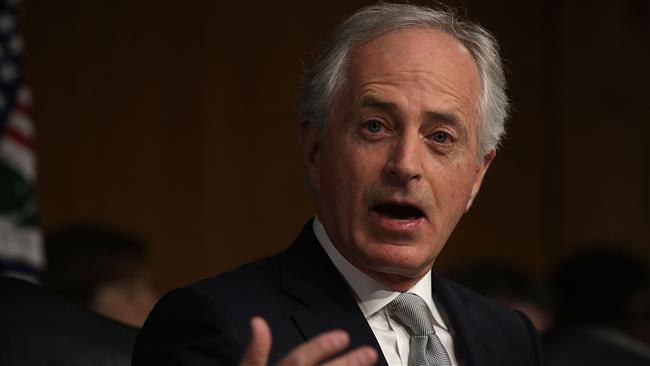 An influential US Congressman has said he would try to stop US arms sales to the [Persian] Gulf Cooperation Council ([P]GCC) until several regional Arab countries involved in a dispute with Qatar resolve their differences with Doha.

Republican Senator Bob Corker, the chairman of the US Senate Foreign Relations Committee, made the remark on Monday.

Three of those countries, plus Egypt, have severed diplomatic ties and cut all land, sea, and air contacts with Qatar. The four accused Qatar of supporting terrorism, an allegation denied by Doha.

“All countries in the region need to do more to combat terrorism, but recent disputes among the GCC countries only serve to hurt efforts to fight ISIS and counter Iran,” Corker, who is known for his anti-Iran stances, wrote in a letter to US Secretary of State Rex Tillerson.

Corker is on a congressional group that reviews arms deals before they can go ahead.

An aide to the Republican senator, however, said his push would not affect the sales that had already been reviewed by Congress or non-lethal assistance, including training. The Congress has also already lent its blessing to the sale of $350 billion in precision-guided munitions and other offensive weapons to Saudi Arabia.

The sum includes $110 billion in weapons that US President Donald Trump agreed to sell to the kingdom during a visit to Riyadh in May. The diplomatic rupture has been deemed an outcome of that trip, which analysts say Saudi Arabia took to be a sign of unconditional US support for a more aggressive foreign policy. Former US President Barack Obama had withheld the sale of certain weapons that Trump approved for sale to Riyadh.

The US has sent mixed signals regarding the dispute among the Arab countries. While Trump himself has taken sides with the Saudi-led countries, Tillerson and other state officials have attempted to sound less direct, urging dialog.

Some US officials have even seemed to contradict Trump. US State Department spokeswoman Heather Nauert recently cast doubt on the declared motives of the Saudi-led bloc of countries that have boycotted Qatar.

The US has a military base in Qatar, its largest in the Middle East.

Qatar says its neighbors have attempted to punish it merely for its refusal to toe their line on matters of foreign policy.

During his trip to Saudi Arabia, Trump took part in a [P]GCC summit in which he called for Iran to be isolated.

A final statement of the summit included some anti-Iran articles.

Senator Corker said, “Unfortunately, the [P]GCC did not take advantage of the summit and instead chose to devolve into conflict.”

Tillerson had earlier called on the Saudi-led countries to clarify explicit demands from Qatar, which they ultimately did by issuing a list.

Doha has rejected the demands, among them one that calls for the severance of ties with Iran.