Azerbaijan complains to Chamber of Deputies of Mexico 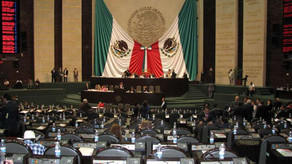 Azerbaijani embassy to Mexico has complained to the Chamber of Deputies regarding the illegal visit of a group of Mexican lawmakers to the Azerbaijani territories occupied by Armenian Armed Forces. Report informs referring to the famous Mexican newspaper El Financiero. The article says that Azerbaijan`s charge d'affaires in Mexico Mammad Talibov met with president of Mexico’s Chamber of Deputies Jorge Carlos Ramírez Marin in order to express the protest of official Baku.

M.Talıbov said that separatist regime established in the occupied territories of Azerbaijan by Armenia is a result of aggression and occupation. For this reason, the mentioned visit is provocation and unacceptable.
Diplomat added that the visit of lawmakers to Nagorno Karabakh undermines bilateral relations between Azerbaijan and Mexico. He requested the president of Chamber of Deputies to investigate this visit and take measures for avoiding similar things in the future.

“An appeal sent to Mexican Secretariat of Foreign Affairs by Azerbaijan`s charge d'affaires in Mexico read that this behavior contradicts to the spirit of existing friendship and cooperation relations between two countries,” said in an article published by El Financiero newspaper.