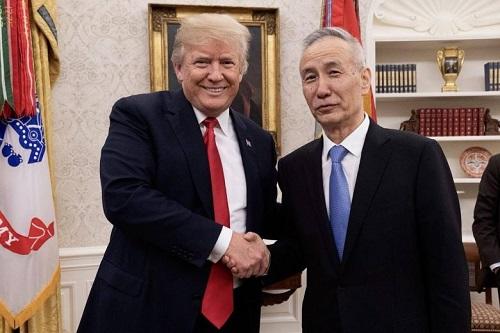 Chinese President Xi Jinping sent to US President Donald Trump a message via Vice President Liu He, who met for talks with the American leader on Thursday in Washington.

"I think we’ll start by reading the letter that President Xi sent to me and to us. It puts us off to a good foot," a statement from the White House quoted Trump as saying when he was opening his meeting with China’s Liu.

Chinese Vice President Liu He was heading his country’s delegation at the talks in the United States on January 30-31 regarding the bilateral trade.

A message from President Xi to Trump said in particular that "Right now, China-U.S. relations are at a critically important stage."

"Last month, we had a successful meeting in Argentina, in which we agreed to work together to build a bilateral relationship based on coordination, cooperation, and stability," the message, which Trump asked to read out at his meeting with Liu, continued. "That was followed by the good conversation we had through a phone call and the letters of congratulations we sent each other on the 40th anniversary of our diplomatic relations."

"Guided by the agreement we reached, our economic teams have engaged in intensive consultations and made good progress," the president of China said. "I hope our two sides will continue to act in a spirit of mutual respect and win-win cooperation, and step up consultations by meeting each other halfway in order to reach an early agreement that works for the interests of both sides."

President Xi also said he highly valued meetings and telephone conversations with the president of the United States.

"I cherish the good working relations and personal friendship with you. I enjoy our meetings and phone calls in which we could talk about anything. It falls to us to work together and accomplish things meaningful for the people of our two countries and the world at large."

After the message from the Chinese president was read, US leader Trump said: That’s a beautiful letter and we appreciate it."

In early December, Trump and Xi met on the sidelines of the G20 summit in Argentina, where they had agreed to take steps within a three-month period toward a new trade agreement between China and the United States. The US president stated at that time his decision against hiking tariffs on Chinese goods from 10 to 25% on the total sum of $200 billion, as he previously planned. Both sides agreed at that time that March 1, 2019, would be the deadline to ink the mutually acceptable trade deal or the tariffs would be eventually raised.