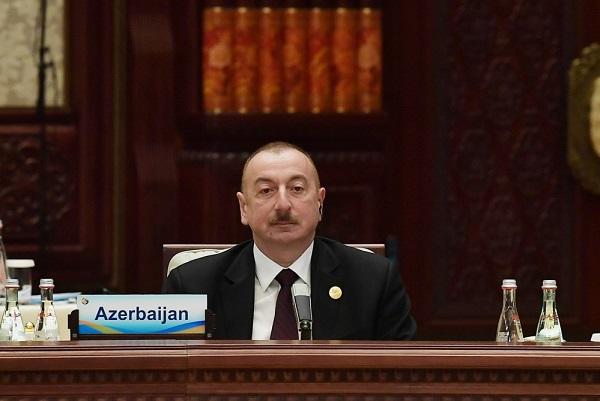 On April 27, the second "One Strap, One Way" International Cooperation Forum in Beijing continued its work.

Axar.az informs that, president of Azerbaijan Ilham Aliyev has attended the forum.

President of the People's Republic of China Si Jinping greeted the President of Azerbaijan Ilham Aliyev and other heads of state and government.

Si Jinping said the Forum, which has been held for the second time since its inauguration, was successful and opened new opportunities for cooperation between the two countries. He expressed his gratitude to the heads of states and governments participating in the forum saying that the "One Path, One Way" initiative, which created a new format of cooperation in the world, will give impetus to the development of the global economy and the revival of the ancient Silk Road.

The first session of the Forum is devoted to "Promotion of cooperation for the purpose of exploring new sources for development".

Then the heads of state and government took a photo.

President Ilham Aliyev also attended the second session of the Forum on "Strengthening Mutual Policy and Building a Nearer Partnership".

Later, the head of state attended the third session on "Promotion of Green and Sustainable Development for the implementation of the UN 2030 Agenda".

Speaking at the session, President Ilham Aliyev thanked President of the People's Republic of China Si Jinping for the invitation. The head of state congratulated the Chinese people on the 70th anniversary of the establishment of the People's Republic of China. President Ilham Aliyev emphasized that Azerbaijan and China are partner countries. The head of state noted that the Memorandum of Understanding on joint promotion of the creation of the "Silk Road Economic Pipeline" during the state visit to China in 2015 was signed.

The Head of State said that the Alat Sea Trade Port and the new Baku-Tbilisi-Kars railway line should be mentioned in the field of transport infrastructure. More than 15,000 kilometers of roads have been built in Azerbaijan and railways have been upgraded. We are particularly active in the East-West transport corridor. We also participate in the development of the North-South transport corridor. Air transport infrastructure has been established in Azerbaijan. So, six international airports have been built. Azerbaijan is the largest trading fleet of 260 vessels in the Caspian Sea. The potential of Azerbaijan in the transport sector is increasing and it creates good opportunities for international cooperation. Unemployment and poverty were reduced by 5% as a result of economic development in Azerbaijan. Transport and energy security are an important element of national security.

The President of Azerbaijan said that "One, road, one road" is not only a transport project, but also a project that promotes peace, security and cooperation.