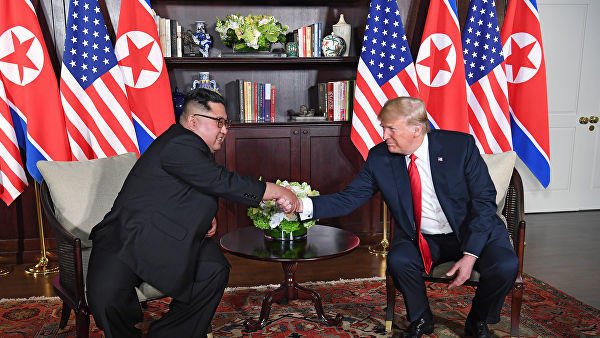 Axar.az reports citing foreign media that, a statement issued by the office of South Korean president said that Trump expressed his support for humanitarian aid during his 35-minute long telephonic call to President Moon Jae-in on Tuesday night, to discuss ways to bring North Korea back to the negotiating table.

The latest development comes despite North Korea test firing short-range ballistic missiles, last weekend into the East Sea in defiance of the U.S.

“The two leaders exchanged views on the joint rapid food security assessment of the North Korea’s food situation by the World Food Program and the Food and Agriculture Organization. President Trump said that South Korea’s humanitarian food supply to the people in the North would be a very timely and positive action, expressing his support to the idea,” the statement uploaded on the website added.

The food security assessment report says that about 40% of North Korea’s population was in urgent need of food aid. The country has suffered its worst harvest in a decade.

South Korean presidential spokeswoman, Ko Min-jung said the two leaders discussed how to prevent North Korea from veering off the track of dialogue for denuclearization and how to resume the dialogue as early as possible.

"Moon told Trump, he does not believe the missile launch was a provocation and that the move should not be considered a ground to break talks," Seoul-based daily Chosunilbo reported.

Technically sanctions do not ban extending humanitarian assistance to Pyongyang, but Washington has opposed such aid, fearing that it would undermine global sanctions regime and thus embolden Pyongyang to circumvent nuclear concerns.