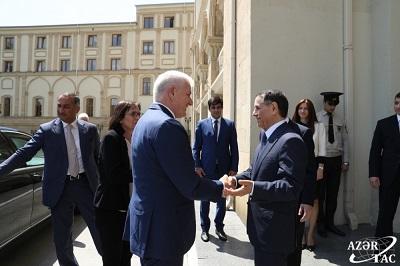 The prime ministers of Azerbaijan and Montenegro first held a one-on-one meeting.

The meeting then continued in an expanded format with the participation of the delegations.

Highlighting Azerbaijan-Montenegro friendly relations, Prime Minister Novruz Mammadov said that close ties were established between the two countries. “Azerbaijan always attaches high importance to developing relations with Montenegro. High-level reciprocal visits play a special role in developing relations. Of course these visits and the talks held testify to a fruitful cooperation between the two countries in different fields of economy, including mutual investment making. We should expand these ties in the future. Your visit will also give a positive contribution to the development of these relations,” Novruz Mammadov underlined.

Novruz Mammadov noted that Azerbaijan`s Nagorno Karabakh region and seven adjacent regions had been under Armenia`s occupation for a long time. The Prime Minister said that Armenia-Azerbaijan Nagorno Karabakh conflict should be solved in accordance with the UN Security Council resolutions, Helsinki Final Act and Azerbaijan’s territorial integrity.

The sides also exchanged views on expansion of cooperation in the fields of energy, tourism, construction and transport as well as other issues of mutual interest.