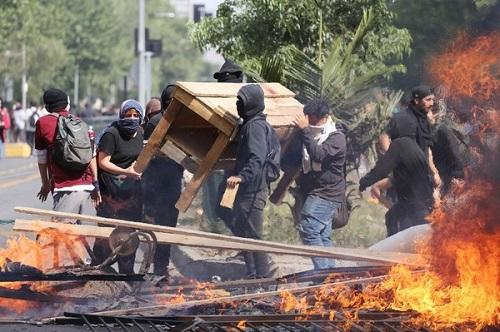 Chilean President Sebastian Pinera has vowed to adopt a “new social contract” to reduce inequality, amid public discontent that has prompted the country’s worst unrest in years.

In a national address from the Moneda Palace in Santiago on Monday evening, the conservative billionaire said that he would hold a meeting with opposition leaders on Tuesday to adopt the “new social contract,” which he said would help find solutions to problems afflicting Chilean people.

He spoke in a conciliatory tone, in contrast to remarks on Sunday in which he said the country was “at war” with “delinquents” in a broad reference to protesters.

“If sometimes I have spoken harshly... it’s because it makes me indignant to see the damage and pain that this violence causes,” he said.

Protests began in Chile last Friday, sparked by a hike in transport fares. Looting and violent protests left 11 people dead over the weekend.

Unrest continued on Monday, with thousands of people staging marches around Santiago in protest at the high costs of living and calling for Pinera’s ouster.

Police used water cannon and tear gas against the protesters, who defied a night curfew.