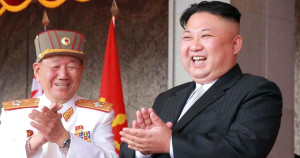 Democratic People's Republic of Korea`s (DPRK) delegation has left Pyongyang to take part in the 18th NAM Summit to be held in Baku, Azerbaijan.

Axar.az reports citing the Korean Central Telegraph Agency that Choe Ryong Hae leads the delegation, who is a member of the Presidium of the Political Bureau of the Central Committee of the Workers' Party of Korea, first vice-chairman of the State Affairs Commission of the DPRK and president of the Presidium of the Supreme People's Assembly.

It should be noted that Kim Jong Un is the head of the State Council of the DPRK.

The 18th summit of the Non-Aligned Movement to be held in Baku on October 25-26.

During the summit of the Non-Aligned Movement, Azerbaijan will assume the chairmanship of the organization for three years.