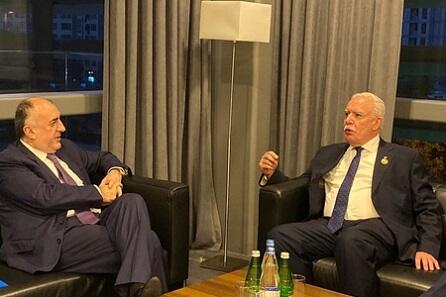 At the beginning of the meeting, the Palestinian Minister congratulated Azerbaijan on its presidency in the Armed Forces, the 28th anniversary of the state independence and joining the G-77 group.

During the conversation, it was noted that the UN Charter and the TC resolutions are the basis for the resolution of conflicts and conflicts in the world. In this context, it was noted that Azerbaijan supports efforts to promote the rights of the Palestinian people within the UN, as well as the Organization of Islamic Cooperation and other international platforms.

The interlocutors underlined the importance of joint efforts in multilateral formats and agreed that it could significantly contribute to international peace and security.

The Palestinian Foreign Minister wished success to our country, expressing confidence that these high values ​​will be promoted during the presidency of Azerbaijan in the Non-Aligned Movement and will contribute to global and regional peace and prosperity. In this regard, the current Summit was remarkable and emphasized the importance of promoting multilateral cooperation in the modern world.

Minister Elmar Mammadyarov paid attention to the importance of coordinated activities between the Q-G and G-77 and joint efforts within the South-South Cooperation Platform. The sides also exchanged views on other regional issues of mutual interest.