Statement from Nagorno-Karabakh from Syria 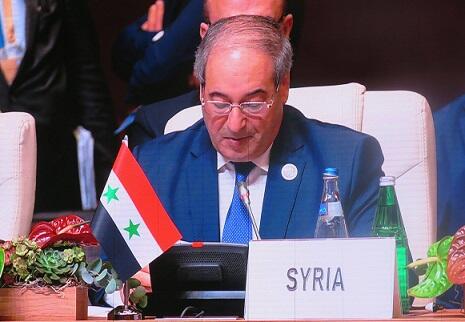 I would like to take this opportunity to thank the government and people of Azerbaijan for their hospitality. We are also grateful for the successful chairmanship of Venezuela.

Axar.az informs that, the statement came from Deputy Foreign Minister of the Syrian Arab Republic Faisal al-Mikdad at the Non-Aligned Movement's Baku summit.

He noted that the Non-Aligned Movement played a special role in the world:

“We should try to recognize the election results in countries like Venezuela, Nicaragua and Bolivia, whether they like it or not. My state relies on QH. We are well aware of the threat zones in our territory with the support of the Allies and the Free Syrian Army. Terrorism is a major threat to the entire international community. Of course, the Copy Front, ISID is now questioning the security of our state. Today we have to make sure that this borderless trouble does not spread. This is especially true in developing countries. We must fight together against terrorism. We must be united in this struggle. In particular, we should not use the fight against terrorism as a reason to interfere in the internal affairs of this and other countries. Our country today faces enormous difficulties in terms of territorial integrity. The US operations today are one-sided. They are grossly violating international law. My country deeply appreciates the QH. The movement also supported the intervention of Turkey. The territorial integrity of Syria must be preserved. We must protect our country from the invasion of Turkey. Mr. Erdogan and Mr. Trump should not hinder the peace process. We want all foreign countries to be expelled from our territory. ”