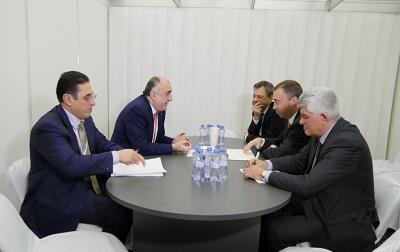 Azerbaijan`s Foreign Minister Elmar Mammadyarov has met with EU Special Representative for the South Caucasus Toivo Klaar on the sidelines of the 26th OSCE Ministerial Council meeting in Bratislava.

The sides exchanged their views on the settlement process of the Armenia-Azerbaijan Nagorno-Karabakh conflict.

FM Elmar Mammadyarov informed his interlocutor about the recent meeting between the ministers of foreign affairs of Azerbaijan and Armenia with the mediation of the OSCE Minsk Group Co-chairs. He stated the importance of resolving the conflict in accordance with the related resolutions of the UN Security Council and in this regard, emphasized the withdrawal of the occupying forces from the occupied territories of Azerbaijan and the return of the Azerbaijani internally displaced persons to their places of origin.