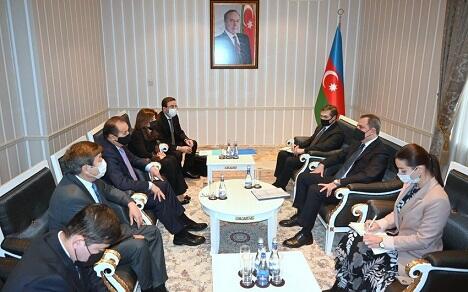 Axar.az reports that welcoming the delegation, Bayramov praised the next visit to our country, especially the visit to the liberated territories.

Speaking about the restoration and reconstruction work carried out by Azerbaijan in the liberated territories, the Minister stressed that these projects serve the future prosperity of the region.

Secretary-General Baghdad Amreyev noted that during his visit to Azerbaijan they visited the liberated lands and got acquainted with the situation there, and expressed interest in involving Turkish cooperation organizations in the restoration of these territories. Reiterating his support for Azerbaijan's rightful position, the Secretary-General noted that Azerbaijan's victory was a victory that united the entire Turkic world.

The sides exchanged views on the participation of the Turkic Council, TURKSOY, and the International Foundation for Turkish Culture and Heritage in the process of restoration of the liberated territories of Azerbaijan, as well as future plans for the city of Shusha.

The meeting also discussed prospects for future cooperation within the Hair Council and upcoming meetings.