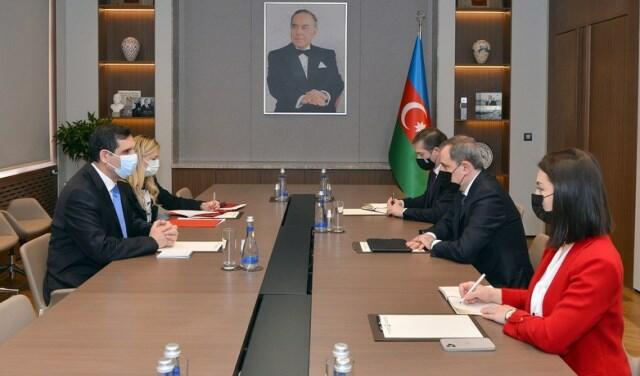 On April 7, Foreign Minister Jeyhun Bayramov received Ambassador Extraordinary and Plenipotentiary of the Republic of Turkey to Azerbaijan Erkan Ozorali on the occasion of the completion of his diplomatic mission.

Axar.az reports that this was reported by the Foreign Ministry's press service.

Minister Jeyhun Bayramov noted with satisfaction the role of Erkan Ozaral as ambassador in the development of high-level relations between the two brotherly countries and thanked him for his contribution in this regard.

Minister Jeyhun Bayramov noted that the high-level relations between Azerbaijan and Turkey, including the ambassadors, place a great responsibility on him.

Ambassador Erkan Ozaral said he did not separate Azerbaijan from Turkey and this will always be the case. He said he was proud to serve as ambassador at a very important time for Azerbaijan and thanked for the high attention and cooperation shown to him during his diplomatic career. Emphasizing with satisfaction that the visa requirement for visits between the two countries has been abolished and our citizens can now travel on the basis of an identity card, the ambassador described it as a manifestation of fraternal relations between our countries.

Minister Jeyhun Bayramov expressed confidence that Erkan Ozaral will cope with his next task with high professionalism and wished the ambassador success in his future endeavors.

The parties also exchanged views on issues of mutual interest.