Speaker of the Parliament met with the Turkish Ambassador 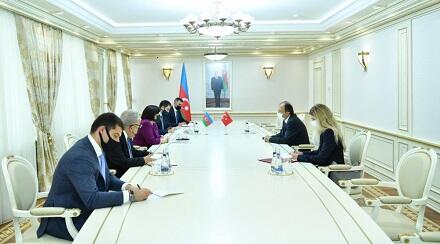 On May 24, Speaker of the Milli Majlis Sahiba Gafarova met with newly appointed Ambassador Extraordinary and Plenipotentiary of the Republic of Turkey to Azerbaijan Cahit Bagci.

Axar.az reports that the press and public relations department of the parliament told that Sahiba Gafarova congratulated the ambassador on the beginning of his diplomatic mission in Azerbaijan. The Speaker of the Milli Majlis said that today the relations of friendship, brotherhood and strategic partnership between Azerbaijan and Turkey are based on the philosophy of "one nation, two states" mentioned by the great leader Heydar Aliyev. Azerbaijan and Turkey are the closest countries in the world.

The Speaker of the Milli Majlis stressed that during the 44-day war, Turkey set an example of true brotherhood by providing high-level moral and political support to Azerbaijan. Sahiba Gafarova expressed confidence that Azerbaijan and Turkey, two brotherly countries, will continue to support and stand by each other in all matters.

Speaking about the relations between the Turkish and Azerbaijani legislatures, Sahiba Gafarova said that there are large friendship groups in the parliaments of both countries. It was stressed that the regular meetings of our deputies on various platforms are very important in terms of discussing issues of mutual interest. Expressing gratitude for the cordial meeting, Ambassador Cahit Bagci conveyed the cordial greetings of the Speaker of the Turkish Grand National Assembly Mustafa Shentop to the Speaker of the Milli Majlis.

Noting that relations between Turkey and Azerbaijan are successfully developing in all areas, the ambassador said that the two brotherly countries support each other in all matters, adding that it is an honor and a great responsibility for him to work in friendly and brotherly Azerbaijan. He said he would spare no effort to deepen our relations during his tenure.

The Speaker of the Milli Majlis wished the ambassador success in his diplomatic mission in Azerbaijan.