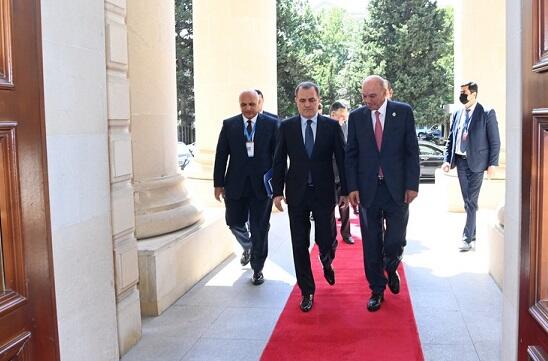 Azerbaijan's Foreign Minister Jeyhun Bayramov met with Faysal Al-Fayez, Chairman of the Senate of the Hashemite Kingdom of Jordan.

Axar.az was informed about this by the press service of the Ministry of Foreign Affairs.

The minister warmly greeted the chairman of the Senate and said that his personal participation in the Baku conference of the Non-Aligned Movement (NAM) Parliamentary Network contributed both to the work of the event and to the development of our bilateral relations. The minister emphasized with satisfaction Azerbaijan's cooperation with Jordan on bilateral and multilateral platforms, including within the framework of OIC and UN.

The 30th anniversary of the establishment of diplomatic relations between our countries will be celebrated next year, and the importance of organizing events on this occasion was highlighted.

The chairman of the Senate, Faysal al-Fayez, said that they are interested in the development of relations with Azerbaijan and that the intensification of bilateral visits is important in this regard. He noted the active role of Azerbaijan within the framework of the chairmanship of the National Assembly, and that the proposed initiatives are admirable. The chairman emphasized the need to increase the role of the Non-Aligned Movement at the world level against the background of a number of worrying events taking place in the world.

At the meeting, opinions were also exchanged on the regional situation, as well as issues of global importance.