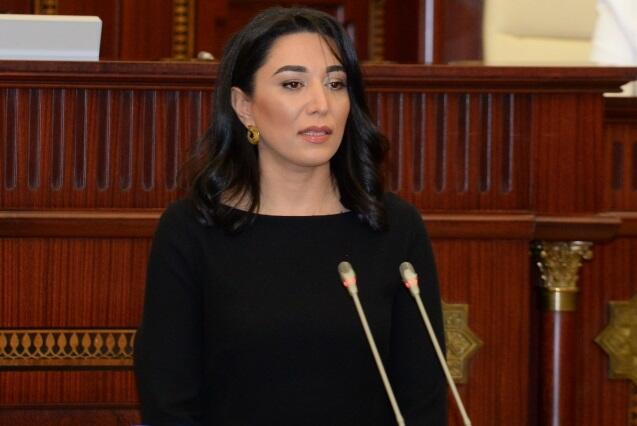 'Memorial day' is a very important page in the modern history of Azerbaijan.

She noted that the announcement of September 27 as 'Memorial Day' has a special meaning. The victory in second Karabakh war, which united the entire Azerbaijani people into a unified force led to the creation of opportunities for establishment of peace and development of the entire region.

The reason for this victory was Azerbaijani Armed Forces under the leadership of the Victorious Supreme Commander-in-Chief President of Azerbaijan President Ilham Aliyev, who showed great heroism in battles. Conditions were created for the return of Azerbaijani internally displaced persons to their native lands, for which they yearned for many years, and today the country is experiencing the joy of the 'Great Return'.

"May Allah rest the souls of Azerbaijani martyrs who sacrificed their lives in the name of restoring the territorial integrity of Azerbaijan, I wish their families patience. Azerbaijan will always be proud of its martyrs, Azerbaijani people will always honor their memory. I also want to honor the memories of civilians that became martyrs as a result of grave crimes, committed by Armenia, including the memory of children who died. Armenia must answer for these crimes, committed against the civilian population, for the violation of the requirements of the IV Geneva Convention," Aliyeva said.

"After the end of the second Karabakh war, Azerbaijan also expanded its activities in this direction, created a new sector related to the protection of the rights of families of martyrs and war veterans. Azerbaijan pays special attention to their appeals. Actions are being taken in the regions to provide medical and psychological assistance to family members of martyrs and war veterans, to provide them with support," she added.

Moreover, Azerbaijani ombudsman emphasized that from the moment of gaining independence to the present day, Azerbaijan has been suffering from the policy of aggression and ethnic hatred of Armenia. Armenia has committed many international crimes against Azerbaijan, such as military aggression, genocide, ethnic cleansing, terrorism, environmental crimes, destruction and desecration of historical, religious, cultural monuments, mining of territories, the use of mercenaries, attacks on civilians using prohibited weapons.

"At the same time, during the occupation, a policy of illegal resettlement was carried out in the internationally recognized territories of Azerbaijan, Armenians from Armenia, as well as from Lebanon and Syria were illegally settled in houses belonging to Azerbaijanis. When, in accordance with the trilateral statement dated November 10, 2020, Armenians left Azerbaijani occupied lands, and also recently, when they left Lachin villages of Zabukh and Sus, Azerbaijan witnessed manifestations of hatred policy by Armenia. Among them - damage to flora and fauna, arson and desecration of houses," Aliyeva stated.

"Azerbaijan, even in the period after the cease of fire, suffered losses as a result of mine explosions, laid by Armenian troops. Each of these crimes is a violation of human rights and freedoms. Numerous fundamental rights of the Azerbaijani people have been violated, and the requirements of international law are not being observed. Azerbaijani government continues to work to inform the world community about these facts, to bring Armenia to justice for its crimes," she said.

Aliyeva reminded that Ombudsman's office made several statements in connection with Armenian provocation.

"The fact that the Armenian Armed Forces constantly carry out provocations against Azerbaijan in the post-war period causes serious concern. During the suppression of a large-scale Armenian provocation undertaken on the night of September 12 in the Dashkasan, Kalbajar, Lachin, Zangilan directions, Azerbaijani servicemen became martyrs, there were also wounded. At the same time, two of Azerbaijani civilians were wounded," she said.

Azerbaijan appealed to relevant international organizations diplomatic representatives in connection with the large-scale provocation committed by Armenia. The country also appealed to world community to respond harshly to the actions of Armenia that threaten the establishment of fear and sustainable peace in the region.

According to Aliyeva, the attack of Armenia created a serious threat to lives and well being of people and violated many fundamental rights. Fist of all, these actions are evidence of disrespect for international legal norms, as well as the requirements of trilateral statements signed by Armenian PM.

In addition, Azerbaijan has repeatedly addressed the international community in connection with the issue of Armenia's failure to provide accurate maps of minefields. The mine threat delays the process of returning Azerbaijani citizens to their native lands liberated from occupation, and also leads to the death and disability of people. However, during this time, the Armenian Armed Forces repeatedly made new attempts to mine these territories.

"Azerbaijan believes that ethnic hatred towards Azerbaijan is behind this policy in general. The attacks of the Armenian communities on Azerbaijani diplomatic missions abroad under the guise of 'peaceful actions', the sounding of various slogans and attempts to commit acts of vandalism is the evidence of this. Azerbaijan expressed its opinion to the international community in connection with these attacks, and also called on the countries in which country's diplomatic missions are located to ensure the safety of embassies and diplomats. Such attacks must be prevented in accordance with the obligations assumed by host states under international law," she added.

Aliyeva stressed the importance of international support to Azerbaijan, saying that Armenia's hostilities should be strongly condemned at the time when Azerbaijan starts the process of 'Great return' and implements comprehensive construction work on the territories destroyed during the occupation.

"Thus, after second Karabakh war very important opportunities appeared for establishing peace in the region. It was also beneficial for the Armenian side, its people. However, it's very unfortunate that Armenia not only neglected peaceful initiatives, but also demonstrated its destructive intentions through numerous provocations," she stated.

"Although Azerbaijani people suffered for about 30 years from the consequences of the occupation policy of Armenia, no decisive measures were taken against it at the international level. New reality has emerged in the region, the relevant international structures, having demonstrated a fair approach, should condemn the provocations of Armenia that threaten the lives of people, and contribute to the process of establishment of peace in the South Caucasus region. The structure of ombudsman institution will continue to make the necessary contribution in this direction, which is a priority in its activities," Aliyeva said.

Azerbaijani Ombudsman expressed hope that leadership of Armenia will draw lessons from recent events and make efforts towards peace and coexistence, and the international community will support Azerbaijan in its peace efforts.