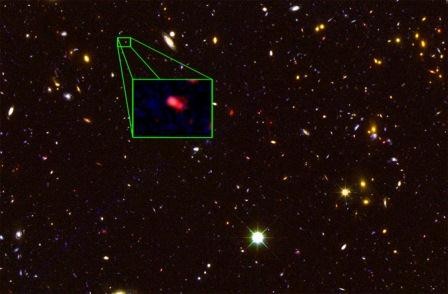 NASA's Hubble Space Telescope has discovered the most remote galaxy ever seen from Earth - 13.4 billion light years away.

Known as GN-z11, the constellation of stars is among the first that formed in the universe, 400 million years after the Big Bang.

A research team from Yale University, the Space Telescope Science Institute and the University of California used Hubble's Wide Field Camera 3 to measure the distance to GN-z11.

Astronomer Pascal Oesch said: "We’ve taken a major step back in time, beyond what we’d ever expected to be able to do with Hubble. We see GN-z11 at a time when the universe was only three percent of its current age."

Researchers say the fuzzy images reveal new clues about the early universe, but quite how GN-z11 was created will remain a mystery for now.

"It's amazing that a galaxy so massive existed only 200 million to 300 million years after the very first stars started to form," said astronomer Gary Illingworth.

"It takes really fast growth, producing stars at a huge rate, to have formed a galaxy that is a billion solar masses so soon."