Zsa Zsa Gabor died at the age of 99 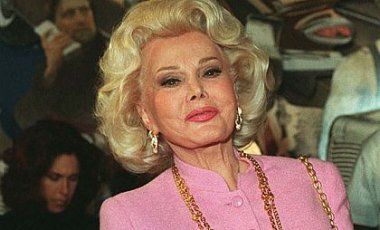 Media personality, socialite Zsa Zsa Gabor has died at the age of 99.

It was reported that Gabor had a heart attack.

She was famous, basically, for being famous.

Gabor was one of three acting Gabor sisters, all born in Hungary. She never enjoyed the acting success of sister Eva, of “Green Acres” fame. But Zsa Zsa, often referred to as the “Paris Hilton of her time” was known for marrying well — and often.

Gabor was married nine times including to hotel magnate Conrad Hilton, Paris’ great-grandfather, for five years. She was also married to actor George Sanders for six years. Both of those marriages ended in divorce.

In 1986, she married Frederic Prinz von Anhalt and remained married to him until her death.

Her biggest credits included the movies “Moulin Rouge” and “We’re Not Married.” On the small screen she played “Batman” villainess Minerva. Off-screen, she was known for being a frequent talk show guest who would tell funny stories about her life. And she was also known for calling everyone “Dah-link.”

Well, almost everyone. In 1989, she had a run-in with a Beverly Hills cop named Paul Kramer while driving her Rolls-Royce convertible. She famously slapped Kramer during a traffic stop and was charged with assault. After being found guilty, she was sentenced to three days in jail, 120 hours of community service and ordered to undergo a psych evaluation.

Sister Magda, also an actress and socialite, died in 1997 at age 81. She also married actor George Sanders, one of her six husbands.