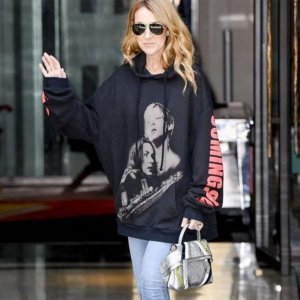 Axar.az reports that perhaps the most photographed look — and viral moment — of all was a Titanic sweatshirt by Vetements, which Dion teamed with skinny distressed jeans and gold Gucci sandals. The hoodie, emblazoned with Jack Dawson and Rose DeWitt Bukater (aka Leonardo DiCaprio and Kate Winslet), not only rocked social media, but also won the songstress' affections. "Law has changed me 65 times a day, but one of my favorites was the Titanic sweatshirt," Dion tells THR.

Says Roach, "I had the idea to put her in the Titanic sweatshirt because this year marks the movie’s 20th anniversary. I thought it would be so cool, but I was afraid she’d think it was corny. When I actually pulled it out and showed it to her, Celine snatched it up and threw it on. She was like, 'Man, this is cool.' "

Dion says she's incredibly proud of her work on 1997's Titianic hit single "My Heart Will Go On" because it helped get her where she is today. "My mother saw me [wearing the sweatshirt] and she said, 'Oh my god, this is way too big for you!' and she asked, 'Since when are you wearing clothes that are too big for you?’ She did not understand that it was cool!" laughs Dion.