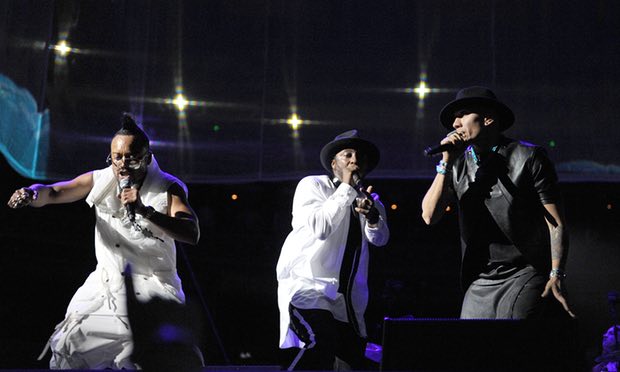 American group the Black Eyed Peas have become the latest act to announce they will join Ariana Grande for a benefit concert in Manchester to raise money for the victims of last week’s suicide bombing.

After much speculation, Grande confirmed on Tuesday that she would be returning to the city on Sunday to headline the One Love Manchester concert, nearly two weeks after a suicide bombing at the Manchester Arena following her show killed 22 people and injured 116.

The concert, which will take place at the Old Trafford cricket ground, will feature a stellar lineup including Justin Bieber, Coldplay, Katy Perry, Miley Cyrus, Pharrell Williams, Usher, Take That and One Direction’s Niall Horan.

Tickets for the star-studded show go on sale on Thursday at 10am and those who were at Grande’s concert last Monday are being offered free tickets.

ITV confirmed on Wednesday that the final of Britain’s Got Talent would be moved from Sunday night to Saturday at 7.30pm, to avoid a clash with the concert. The British Soap Awards, which were initially scheduled for Saturday evening, will instead be broadcast on Tuesday at 8pm.

A spokesman for ITV said: “Ariana Grande’s One Love Manchester benefit concert is bringing artists and the public together, and will raise funds for the Red Cross’s Manchester Emergency Fund. We have no desire to distract from this important cause, so we have taken the decision to move the Britain’s Got Talent Final from Sunday night.”

Speaking on Tuesday, chief constable Ian Hopkins said police had consulted the families of the victims about Grande returning to Manchester, and that the majority were “very much in favour”. “There are some that clearly aren’t,” he said. “That is absolutely understandable.”

About 50,000 people are expected to attend the event, which will be broadcast on BBC television. A testimonial game for the Manchester United player Michael Carrick, due to take place Old Trafford football ground – less than half a mile from the cricket club – on Sunday evening, has been rescheduled to kickoff at 2.30pm to avoid clashing with the concert.

Hopkins said police had been helping Grande’s and Carrick’s teams to reach a compromise, as holding the two events at the same time would cause traffic chaos and security issues. He added that police would also be dealing with crowds returning from the Champions League final in Cardiff, which takes place on Saturday night.

Writing on Twitter, Carrick apologised for any inconvenience caused by the change in kickoff time. “Our game, and the coming together of the people of Manchester has taken on a much greater significance since the tragic events of Monday 22 May,” he said.

“I personally want to extend my heartfelt condolences to the families, friends and all those affected. We want everybody to know that we are Manchester and we show a sense of togetherness and we give our full support to the benefit concert after our game. I’m looking forward to seeing all of you this weekend at the testimonial to celebrate what our city is all about.”

In a statement posted on her social media accounts, Grande said: “My heart, prayers and condolences are with the victims of the Manchester attack and their loved ones. There is nothing I or anyone can do to take away the pain you are feeling or to make this better. However, I extend my hand and heart and everything I possibly can give to you and yours, should you want or need my help in any way.

“We will not quit or operate in fear. We won’t let this divide us. We won’t let hate win … Our response to this violence must be to come closer together, to help each other, to love more, to sing louder and to live more kindly and generously than we did before.”