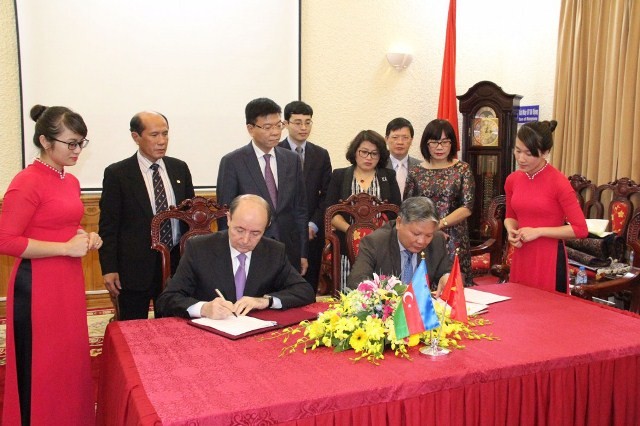 The delegation headed by Azerbaijan`s Justice Minister, Chairman of Judicial-Legal Council Fikrat Mammadov has visited on March 7-10 Vietnam on the invitation of the Minister of Justice of this country to further expand legal relations between Azerbaijan and Vietnam within development of the bilateral relations.

Having noted the relation of friendship and effective cooperation between the two countries, Fkirat Mammadov reminded historical visits of the great leader Heydar Aliyev to this country and the great son of the Vietnamese people Ho Chi Minh to Azerbaijan. He also noted special role of mutual visits of the heads of states in the last two years in strengthening of bilateral ties and signing of important documents in various areas.

Mammadov highlighted the large-scale legal reforms carried out under the leadership of the President of Azerbaijan Ilham Aliyev.

Noting special significance which is attached in Vietnam to full cooperation with the Republic of Azerbaijan, the Minister of Justice of Vietnam Ha Hung Cuong reminded the support given by Azerbaijan to his country during fight for independence and the help in preparation of national specialists. The Vietnamese minister has noted that he knows about comprehensive dynamic progress of Azerbaijan, about the development of judicial and legal system, that success achieved by Azerbaijan in this area arouses great interest, and its positive experience will be taken into account when carrying out legal reforms in Vietnam.

After negotiations, the sides have signed the cooperation agreement between the Ministries of Justice of two countries.

The Agreement envisions expansion of cooperation between judicial authorities, mutual visits of delegations, training of justice personnel, legal researches and teaching, and also implementation of other actions interesting for both parties. The parties have expressed confidence that this important document would be successfully realized and make valuable contribution to development of mutual cooperation. Having noted importance of the Agreement, the Vietnamese minister has specified that it will give ample opportunities for studying of the experience of Azerbaijan.

During the visit, Azerbaijan`s Justice Minister has also met with a number of Vietnamese authorities, held a series of meetings.

Ambassador of Azerbaijan to Vietnam Anar Imanov attended the meetings.