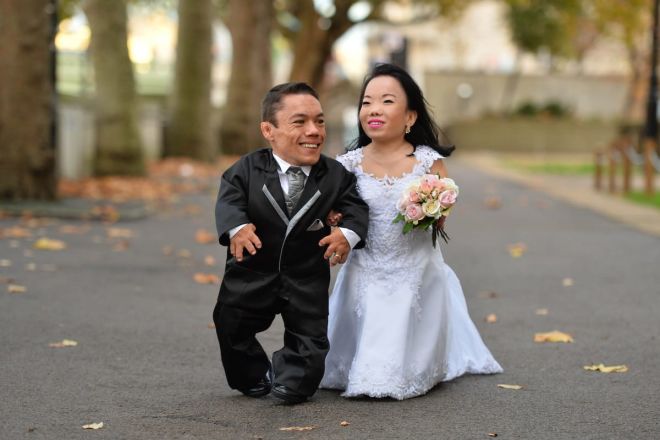 A Brazilian couple have set a new world record after getting married in London.

The pair tied the knot eight years after they met on social media and said they hope their record will help with the drive for equality.

"We hope our new record will encourage the world to look past the physical differences in others and understand all people should be treated equally."

They both have a type of dwarfism – Paulo has diastrophic dysplasia, while Katyucia has achondroplasia dwarfism. Both hold down jobs with Paulo working as a legal secretary and Katyucia as a beautician.

But, according to Katyucia, although they couldn’t be happier now, they didn’t exactly hit it off straight away.

"The first time I started talking to Paulo, he was really annoying. He had cheap pick-up lines."

Although Paulo says it was just a misunderstanding, insisting:

"She thought I was trying to flirt but I was just being nice. According to her I was a really boring guy."

Thankfully though, things have certainly changed and Paulo says they’re ‘a normal couple but our height is a little smaller’.

"The best thing about our relationship is our closeness, our companionship we have for each other. She supports me in everything. She’s my little warrior."