Drones are used in search operations of oilmen 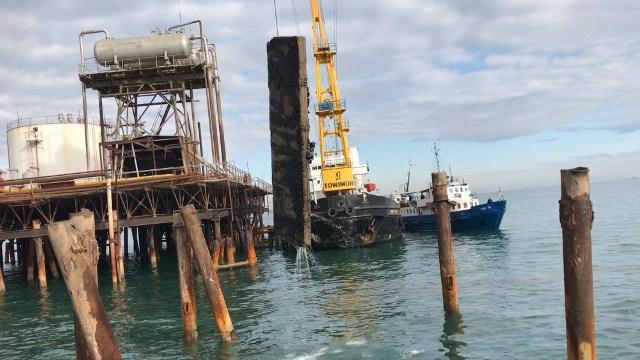 Search and rescue operations are underway in accordance with the plan affirmed by the Headquarters consisting of experts of the Ministry of Emergency Situations, Defence Ministry, State Border Service, the State Maritime Administration of Azerbaijan Republic, SOCAR and Caspian Shipping Company upon the order of Azerbaijani President on several measures regarding accident occurred at Oil Gathering Station of SOCAR’s Azneft PU.

Axar.az reports that, according to the Headquarters, divers of SOCAR’s Diving and Emergency -Rescue Affairs Office closely participated in cleaning works where the pier collapsed. Shirvan-3 crane vessel with the loading capacity of 100 tonnes has picked up some remnants of collapsed pier.

The works are underway throughout 24 hours.

Cleaning the remnants of pier aims to find missing oil under the remnants. Avior vessel of Diving and Emergency -Rescue Affairs Office is participating in search and rescue operations in all supposed directions. At the same time, Mammad Suleymanov and Tabriz Khalilbayli vessels are also conducting search operations under the water.

Several Drones of Defence Ministry and State Border Service have been involved in the search operation.

State Water Rescue Service of the Ministry of Emergency Situations has been involved in visual search in Gobustan and coastal areas.

The accident took place at about 05:00 a.m., on Dec. 15, due to strong wind, which blew away a part of a flyover of the 150-meter long oil-gathering station #3 of the department on oil and gas output of Azneft Production Union. Meanwhile, the board attached to the flyover and a booth on it were also blown away.

A joint special commission has been created to investigate the accident.