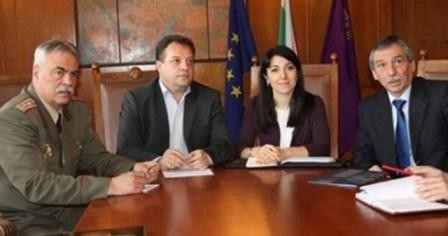 Azerbaijan`s Ambassador to Bulgaria Nargiz Gurbanova, as part of trip to city of Veliko-Tarnovo has held a number of meetings.

The Ambassador met Mayor of the city Daniel Panov who thanked for the project supported by the Heydar Aliyev Foundation on carrying out the reconstruction work in Trapezitsa Architectural Museum Reserve.

They highlighted friendly relations between the two countries and stressed the importance of reciprocal visits.

Daniel Panov spoke about restoration works of Trapezitsa Architectural Museum Reserve and construction and repair of its technical infrastructure.

The ambassador provided an insight into the projects implemented under the initiative of president of the Heydar Aliyev Foundation Mehriban Aliyeva in preserving the cultural heritage across the world.

On bilateral cooperation, the ambassador said there were great prospects for development of relations in the field agriculture.

Daniel Panov, in turn, stressed the importance of development of cooperation in relevant field.

On International Shaki Festival of National Sweets to be held in Azerbaijan, Nargiz Gurbanova invited representatives of the Veliko Tarnovo city companies to attend the event.

The ambassador, as part of the trip, has met Rector of the University of Veliko Turnovo St Cyril and St. Methodius Hristo Iliev Bondzholov, Vice-rector of the Vasil Levski National Military University Veselyn Madansky.

They discussed issues on arranging the mutual exchange of academic staff and students between the higher institutions of both countries, as well as participating the Azerbaijani students within the projects of “Erasmus+” program.