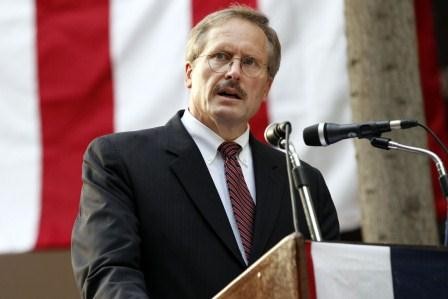 The occupied territories of Azerbaijan must be returned as part of a comprehensive settlement, which would also include a determination of status for Nagorno-Karabakh, US Ambassador to Azerbaijan Robert Cekuta told on Wednesday.

With regard to US Congressman Adam Schiff’s statement that Victoria Nuland, Assistant Secretary of the US State for European and Eurasian Affairs, played a role in the non-adoption of the resolution on Nagorno-Karabakh in PACE, the ambassador said he is not privy to Schiff’s conversations and cannot comment on that.

“However, I would like to reiterate, as Ambassador Warlick has said, that the United States respects Azerbaijan’s territorial integrity and sovereignty,” Cekuta stressed.

Victoria Nuland played a special role in the non-adoption of the resolution on Nagorno-Karabakh in PACE, pro-Armenian US Congressman Adam Schiff said Feb. 9 in an exclusive interview with Asbarez editor Ara Khachatourian for Horizon Live.

“I spoke with the State Department official and one of our ambassadors to the region, raising my concern with this pro-Azerbaijani, Azerbaijani-narrative resolution before the discussion to express my strong opposition. Both Victoria Nuland and the ambassador said they would work against this,” he said.

The draft resolution by Robert Walter on “Escalation of violence in Nagorno-Karabakh and other occupied territories of Azerbaijan” was tabled on January 26, during the PACE winter session. The document was rejected by 66 votes to 70, with 45 abstentions.