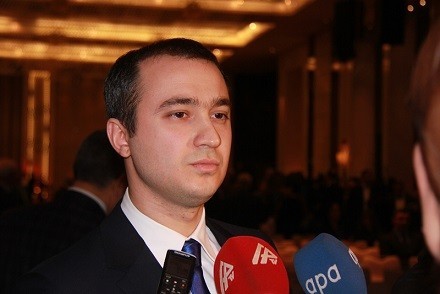 Today the European Azerbaijan Society and the 10th anniversary of the founding of the magazine "Visions of Azerbaijan" marked solemnly in Baku.

Assistant of the President on public-political issues Ali Hasanov, chairmen of the Councils of Elders Fattah Heydarov, MPs, embassies of foreign countries, representatives of international organizations and and other guests attended the event.

Reflecting the activities of the European Azerbaijan Society has been featured in video footage at the beginning of the event.

Chairman of the European Azerbaijan Society Taleh Heydarov briefed the participants about the history and activity of the Company.

Founder and chairman of The European Azerbaijan Society Taleh Heydarov briefed about the history and activity of the Company to the guests.

The European Azerbaijan Society extended in the West serving as a platform to strengthen the positive image of the for over ten years.

TEAS is active in public diplomacy, culture and charity work and its Business Forums highlight investment opportunities in Azerbaijan.

TEAS Azerbaijan devises projects and produces a range of materials to raise awareness of the country’s history, culture and economic development, including the numerous business opportunities that exist in Azerbaijan. It also focuses attention on the unresolved Nagorno-Karabakh conflict.

TEAS is actively engaged in raising awareness of the ongoing Armenian-Azerbaijani conflict over Nagorno-Karabakh and the seven adjacent territories.

TEAS would like to see the Nagorno-Karabakh issue given more prominence in global diplomatic circles. World governments have not prioritised the resolution of this conflict, thereby allowing a situation to develop that has the capacity to explode into a full-blown war at any time.

It is disappointing that, despite the passing of four UN Security Council resolutions; a Resolution from PACE; a Resolution in the EU Parliament and the recent focus on the region, due to the Ukrainian crisis, the OSCE Minsk Group – and the wider international community – are allowing Armenia to continue the illegal occupation of Azerbaijani territories.

TEAS strongly believes that a resolution to the ongoing Nagorno-Karabakh conflict will be vital in increasing the prosperity of the Caucasus region as a whole. We also believe that the West has an important role to play in ending this continuing conflict.

T. Heydarovnoted that,TEAS is proud to organise these events within the framework of theJustice for Khojaly campaign, which is an international awareness campaign initiated by Mrs Leyla Aliyeva, Vice-President, Heydar Aliyev Foundation.

AS is a private co-educational day school founded in 2011 by the European Azerbaijan society (TEAS), a UK registered pan-European organization with representative offices in Azerbaijan, Belgium, France, Germany and the United Kingdom. The school is authorized by the Azerbaijani Ministry of Education but differs significantly from government schools in offering special international programs. The School is authorized to offer the International Baccalaureate Diploma Programme (IBDP) from September 2015 and is currently seeking official authorization for the IB Primary Years Programme (PYP). The school has grown from the original 95 students in 2011 to our current population of over 620 and includes an Early Years Program (ages 4 and 5 years) in addition to its 1-11 grade program.

Heydarov founded TEAS Press publishing in Baku in 2014 and it now also has offices in Russia and Turkey. It collaborates with international publishers and translates internationally recognised academic works into Azerbaijani. And to introduce the scientific and literary achievements of Azerbaijani writers to the wider world, it translates and publishes their works in English; audio-books are also produced.

"Visions of Azerbaijan" magazine's first editor Ann Thomson Ahmedova has performed in the event. He noted that this she learn about Azerbaijan in this magazine.