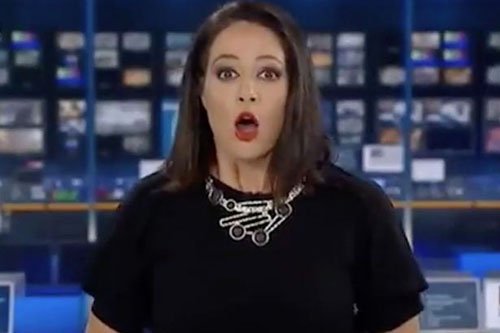 An Australian television presenter has been taken off air after a clip of her gasping as she realised she had missed her cue on camera went viral.

Natasha Exelby has not been on air for a few days at ABC but director of news at the network, Gaven Morris, insisted she had not been dismissed and she will continue to work her scheduled shifts as a casual presenter.

“Live television is a demanding art and slip-ups will happen – our presenters are humans, not robots,” Mr Morris said in a statement.

“We take on-air standards extremely seriously, but we don’t expect perfection. No one would ever be punished for a blooper and, while it isn’t appropriate to publicly discuss confidential details of people’s personal work arrangements, this has not happened to Natasha.”

He added that she had not been punished for the mistake, but he had “conveyed our regret that this has attracted such attention”.

The clip of Ms Exelby playing with her pen before realising – too late – that she was live on air quickly went viral.

Many people have jumped to her defence, however, including fellow television presenters who have aired their own bloopers and argued her career should not be damaged as a result.

“Thank U all for ur generous support,” tweeted the presenter. “Not my finest hour. Myself and my mesmerising pen honourably salute you!”

Close to 5,000 people have signed a petition to get Ms Exelby back on air after news outlets reported she had been sacked, which ABC denied.

When she was reading serious news items several years ago on network Ten, she laughed repeatedly after her colleague asked his interviewee, Irish adventurer Allan Dixon, whether he would "take an Ozzy wife".

“I just wanted to apologise, I got a case of the giggles a little bit earlier while I was reading some very serious news,” she said minutes afterwards. “If I have offended anyone I am sincerely sorry.”

She is best known as the co-host of a breakfast show called Wake Up on Ten, which launched in 2012. She was dismissed after less than two weeks.

Executive producer Adam Boland blamed her lack of “chemistry” with the two other co-hosts, James Mathieson and Natarsha Belling.

Two years later, the entire show was taken off air due to low ratings.