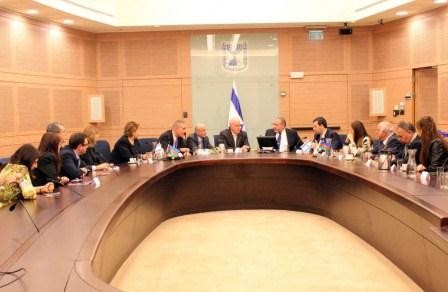 They held a meeting with chairman of Israel-Azerbaijan inter-parliamentary friendship group Avigdor Lieberman, who made a number of proposals to develop relations between Israel and Azerbaijan, and also suggested to involve non-governmental organizations in their efforts to contribute to the strengthening of the bilateral ties.

The Azerbaijani delegation also met with chairman of the Knesset Committee on Foreign Affairs and Defense Tzachi Hanegbi, and Speaker of the Knesset Yuli Edelstein.

Earlier in 2013, Yevda Abramov, Samad Seyidov and other Azerbaijani parliamentarians during the visit to Israel made a traditional guest tour of the Knesset building and visited the famous main hall of the parliament. This year’s trip of Azerbaijani MPs is the first official visit of members of Azerbaijan’s Milli Majlis to the Knesset in the history of the two countries` relations.