Criminal case on the provocation of Armenia 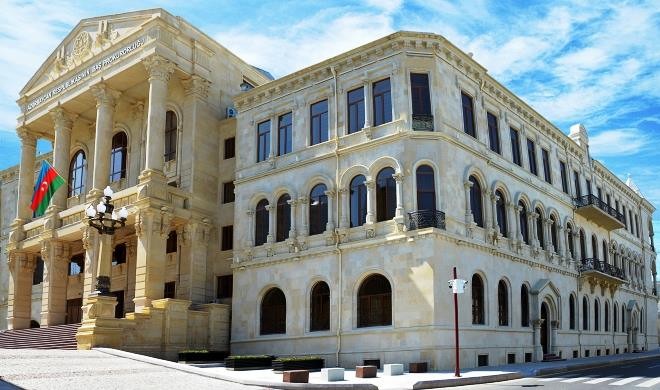 Prosecutor General’s Office and Ministry of Internal Affairs has made a joint statement on the provocation committed by Armenians on the front line.

The press service of Prosecutor's General, recent days as a result of rough violation of ceasefire and requirements of international law by armed forces of Armenia, Azerbaijan’s frontline, settlements not neighboring the contact line and civilian facilities are being intensively fired with large-caliber arms, mines, launchers and artillery shells.

The statement says that on April 2, consequently to this kind of another provocation and diversion acts especially grave and grave crimes accompanied by murder, attempts to murder of civilian population on national ground with hostile intent destructing properties belonging to citizens were registered. 2 civilians died, 10 persons suffered different corporal injuries. Citizens were subjected to largematerial and moral damage. One school building, many houses, units, industrial plants came across with artillery blows of enemy, means of transport, high voltage power lines were destroyed.

Same day at about 8 am one of missiles shot down at the territory of Qaraghaji village of Terter district hit the vehicle “VAZ-2107” conducted by civilian Rahimov Jalal Saday oghlu. As a result, born in 1993 passenger Rahimov Orkhan Valeh oghlu losing his both legs died of bleedingon the spot.Driver Jalal Rahimov and being nearby Ahmadov Ramin Rafig oghlu, 1990, received numerous shrapnel wounds.

At about 12 pm as a result of artillery fires of the enemy one of the missiles hit a civilian apartment located in the same village and belonging to Ahmadov Isa Ali oghlu. Injured by many shrapnel wounds I.Ahmadov was placed at Barda district hospital.

At 19:20 pm one of the missiles shot down at the territory of Shirarkh village of the same district hit the vehicle “Niva-2121” conducted by Aliyev Sadig Natig oghlu, born 1987. As a result, passenger Asadli Farman Elchin oghlu, 1992, injured by numerous shrapnel wounds died of bleeding. Driver and another passenger Rahimov Mubariz Vagif oghlu, 1982, injured by plural shrapnel wounds.

At around 20:00 citizen of Afatli village of Agdam districtHuseynovJumshud Islam oghlu born 1953 was heavily injured to his back near his house by the cannon missile explosion shot by the Armenian military unit and was immediately placed to the hospital.

At around 21:00 one of the cannon missilesshot at the Seydimli village territory droped on the house of ValiyevVahidVali oglu, born 1951 and heavily wounded him and his underage grandson Sanan Valizade, 2003.

One of the cannon missiles fired by the armed forces of Armenia completely destroyed the apartment of Tartar civilian Kruglova Olga Ivanovna, 1949.

In connection with these facts criminal cases were initiated by the relevant articles of the Criminal Code,investigation is being conducted.

Implementation of tasks set during the meeting of Security Council by the President of the Republic of Azerbaijan, Commander-in-Chief of Armed Forces Ilham Aliyev, as well as ensuring public order on the territory of regions where military operations are ongoing, ensuring the security of the civilians and all the necessary measures are being taken by the law enforcement bodies, operational state is kept under control.