Armenian turns her car to Azerbaijanis 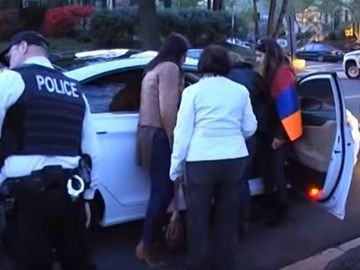 They demonstrated aggression against Azerbaijanis.

An agressive Armenian woman turned her car to Azerbaijanis at the end of the action held by the Armenian lobby outside the Azerbaijani embassy to Washington.

Oxu.Az reports citing ANS PRESS that this moment was recorded by the camera of the ANS TV channel.

Representatives of the US Armenian lobby gathered outside the Azerbaijani embassy to Washington and tried to hold an action of protest. Armenians overseas tried to present Azerbaijan as a party responsible for the incidents on the contact line and the launch of the three-day war. But owing to Azerbaijanis, living in the United States, the attempt failed.

In the response action of protest, led by the co-founders of the U.S. Azeris Network Badir Mammadli, Yusif Babanli and Agil Baguirov, the Azerbaijani side presented the facts that exposed the Armenian lie. They presented the photos featuring the killing of civilians and minors by Armenains on the front line.

Armenians could not conceal there nature this time. At the end of the action one of the protesting Armenian women showed her real face. She turned her car to Azerbaijanis, trying to intimidate them.

But the police who were watching the action saw what happened and detained her. Then the outraged Armenian woman tried to attack ANS camera.