Armenian soldier was killed on the frontline 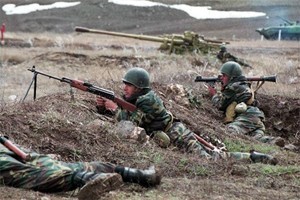 Armenian soldier was killed on Azerbaijan frontline by gunfire.

The information was spread by the separatist regime in Nagorno-Karabakh.The name of the soldier who was killed Simon Cavrsyan, he was born in 1996.

In addition, February 3, at 17:50 hours as in the Armenian-Azerbaijani borders, the result of the enemy destruction of military maid Khudaverdi Imran Mirzayev soldier son killed .

Operations carried out by units of the Armed Forces 3 members of a subversive group were killed. Armenians announced one soldier who was killed.