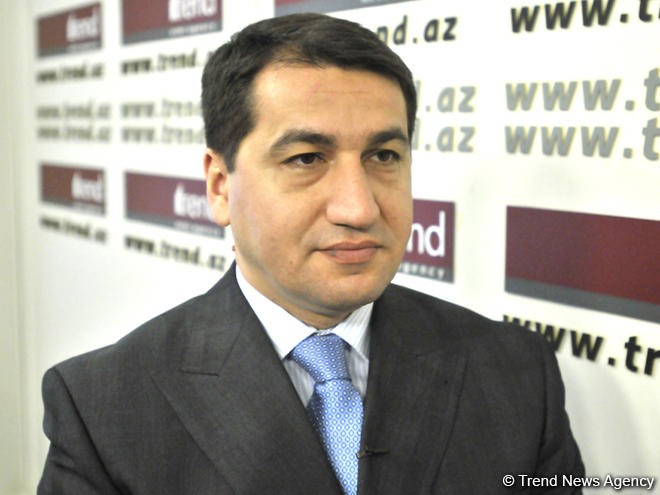 He made the remarks commenting on the reports spread by the Armenian media outlets that Azerbaijan allegedly violated the Geneva Conventions.

He said Yerevan had finally remembered about the Geneva Conventions and other international humanitarian acts, under which Armenia bears responsibility.

"The military aggression of Armenia against Azerbaijan in the occupied territories, the policy of ethnic cleansing against innocent Azerbaijani citizens, the Khojaly genocide, the Azerbaijani captives and hostages subjected to tortures, and many other such crimes were documented based on facts and evidences of witnesses, and were submitted to international organizations," said Hajiyev.

"Committing these acts, Armenia has grossly violated the Geneva Convention and the commitments undertaken in line with other international conventions and documents," he added.

Hajiyev also said the Azerbaijani population is still being killed and injured along the line of contact and on the border of Azerbaijan and Armenia.

"The fact that international community doesn't voice an adequate opinion over Armenia's criminal acts, for which that country bears responsibility, its impunity, urge the criminals on new crimes," said Hajiyev.

"Since April 2, having intensified military activity along the line of contact, Armenia committed war crimes against civilians and acts equivalent to crimes against humanity," Hajiyev said. "Six civilians were killed, including two children aged under 16, and 26 people were injured as a result of shelling of 32 settlements by Armenia. Numerous public and private facilities were severely damaged as a result of the offensive, 232 houses, 99 power transmission line poles, three substations, schools, mosques and other facilities were destroyed."

"In order to shirk responsibilities, Armenia forges photos and footages of killings of its soldiers and spreads false information," he added.

"International community and international organizations will be informed about all the crimes of Armenia, including the acts starting from April 2, and the necessary legal measures will be taken," according to Hajiyev.