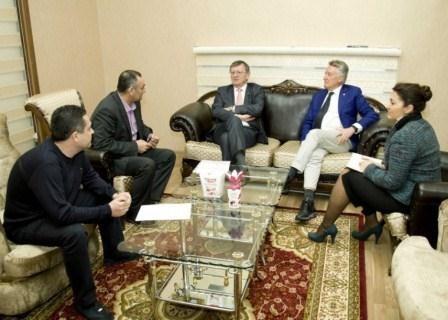 After paying a two-day visit to neighbouring Georgia, CEV President Aleksandar Boricic and CEV Senior Vice President Renato Arena travelled to Azerbaijan for a series of meetings with the highest-ranking officials of this country which is set to co-host the Final Round of the 2017 CEV Volleyball European Championship - Women.

A number of items relating to the organisation of the 2017 CEV Volleyball European Championship - Women were discussed at the meeting as Azerbaijan and their neighbours from Georgia are preparing to co-host the final round of Europe's premier Volleyball competition for women's national teams for the first time in history. Mr Boricic and Mr Arena also visited the competition halls of the country's capital Baku where matches of the much anticipated championship are set to take place.

On Sunday the CEV authorities will be visiting the city of Guba which is also set to welcome next year's European Championship and before travelling home on Monday they will have another high-profile meeting with Azerbaijan's Minister of Youth and Sports, Azad Rahimov, who was also the Chief Executive Officer of last year's highly successful European Games held in Baku.