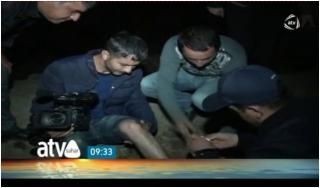 During skirmish, operator of Karabakh bureau of Azad Azerbaijan Television (ATV) Vijay Valiyev, who has been reporting in the area, received shrapnel wound.

Thus, shell of Armenian armed forces to the direction of Garaghaji village off Tartar region of the frontline, exploded and shell-splinter hit his foot.

The wounded has immediately been taken to Barda Region Central Hospital (RCH). Report was told at the hospital, the wounded received first aid, discharged for out-patient medical treatment as his condition was satisfactory.