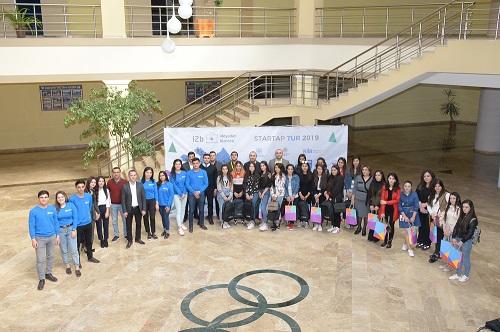 Axar.az reports that the next tour aimed at supporting the expansion of the startup movement and implementation of citizens’ innovative ideas was held in Tovuz. More than 100 young participants from not only Tovuz, but also Gazakh, Shamkir, Goranboy, Tartar, Gadabay, Yevlakh, and other adjacent districts joined the tour, which was organized in Tovuz for the first time. The informative part of the event enlightened the participants about the concept, goals, and targets of the project. The session has proceeded with the competition among the applicants and the jury announced the winners. Top three winners of the competition were “Share my goal”, “Bacarıqlı əllər” (“Skilled hands’), “Görən gözlər” (“Seeing eyes”), respectively.

After Tovuz, within the confines of the project, next startup competition which covered universities was held in Baku. Up to 10 teams from various universities presented their projects to the jury in the startup marathon arranged in “ADA” University. Students from Baku State University, Azerbaijan Technical University, Azerbaijan Architectural and Construction University, Azerbaijan State Oil and Industry University, Baku Engineering University, “ADA” University, Azerbaijan Medical University and Western Caspian University attended competition. About 50 startup projects were presented to the jury for three days. “NanoDesal”, “AntiAge şirəsi” (“AntiAge extrate”), “HealWith”, “Boomerang”, “AgroShare”, “Plan to plant”, “Game of war and modern technologies”, “Palliativ qayğı” (“Palliative Care”) and “Buqələmun” (“Chameleon”) projects were selected as finalists. It is worth noting that, the projects will be further evaluated by the jury upon different criteria, such as uniqueness, market potential, payback period, the period required for the development of a prototype, the capacity of realization and top three winners will be announced to the public soon.

The winners of this competition together with winners from 12 districts will have the opportunity to join “Innocamp”, which will be held in late August of the current year. Three top champions will be announced in the National Final competition to be held in October. Winners will be honored by the organizers and partners and get financial support to turn their ideas into business. Champions and the winners who ranked the 1st place from each district will have a chance to exhibit their projects to the attendees and investors at the 25th Anniversary Azerbaijan International Telecommunications, Innovations and High Technologies Exhibition Bakutel 2019, to be held in October.

Notably, startup tours were held in 8 regions, 16 universities and 3 general educational institutions in the country last year. Within 7 months, over 2 thousand people from various cities and regions of the country took part in the startup marathon.

It should be noted that Barama Innovation and Entrepreneurship Center provided the mentoring support to the teams. Supported by Azercell and PASHA Bank Barama Innovation and Entrepreneurship Center has provided assistance to several projects and startups to turn into independent companies. Being the first business incubator of the country, the center initiated holding a number of training and workshops related to entrepreneurship and information technologies and hosted various events in this field.