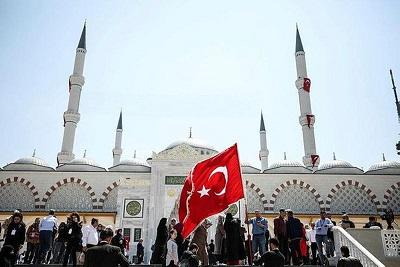 The opening of the biggest mosque in Turkey called “Buyuk Camlica Camisi” took place in Istanbul.

The opening ceremony of the mosque was attended by Turkish President Recep Tayyip Erdogan, as well as religious figures and officials from different countries.

The height of the mosque is 72 meters, which symbolizes the number of nationalities living in Istanbul.

Sixteen names of Allah in honor of 16 Turkic states are written inside the dome. The mosque also has a museum, which holds 11,000 square meters and a library on an area of ​​3,500 square meters.

The new cathedral mosque will become one of the new symbols of Istanbul.

The construction of the mosque, where 63,000 people will be able to pray at the same time, began six years ago.