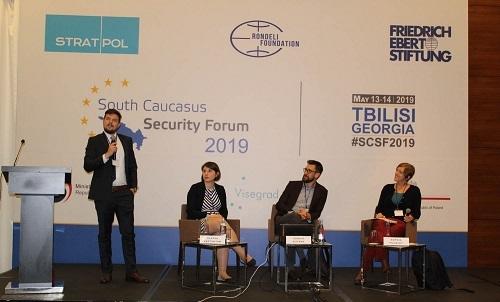 There was dissatisfaction among the participants at the session dedicated to the Nagorno-Karabakh conflict held within the 6th South Caucasus Security Forum in Tbilisi.

Axar.az reports that a delegation from Azerbaijan did not attend the session, so it caused dissatisfaction among the participants.

Joshua Kucera, editor of Eurasianet’s Caucasus attended the session as a moderator, while Olesya Vartanyan, Analyst of International Crisis Group, and Sophia Pugsley, Regional Officer of International Alert on the Caucasus, and took part as experts.

A question “Why is there no speaker representing Azerbaijani side in the panel dedicated to the Armenian-Azerbaijani Nagorno-Karabakh conflict? Do you think it is a fair approach?" was posted on the online platform of the event.

The moderator said that the participants of the session were identified by Stratpol, the organizer of the forum, and they are responsible for this issue.

Official representative of Stratpol interfered in the question-and-answer session and said that every year representatives from Azerbaijan and Armenia attended the session of the forum on the Nagorno-Karabakh conflict. He said that it was decided to make some changes in the format this year.