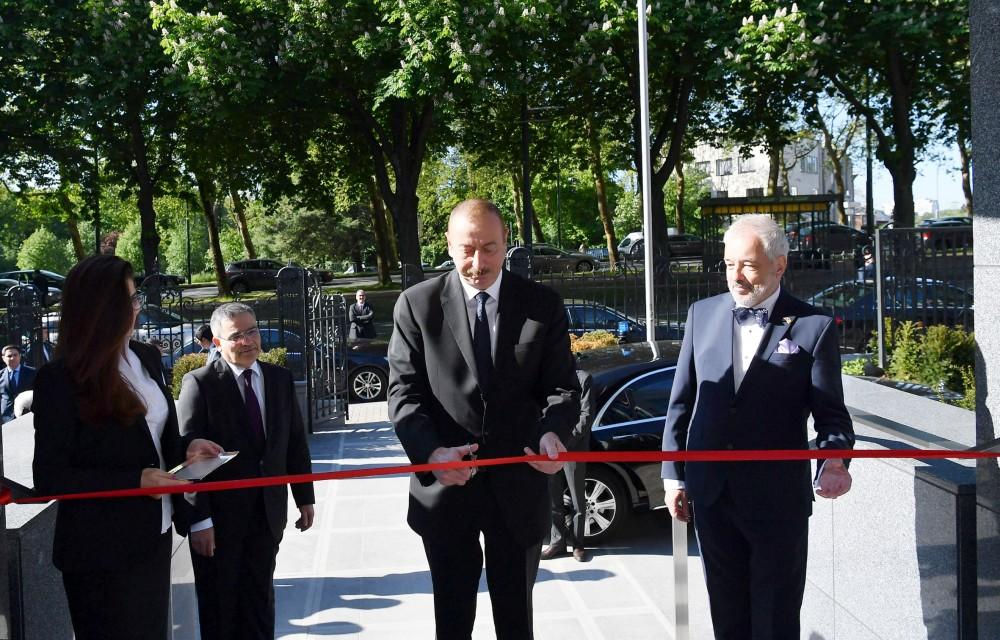 President of Azerbaijan Ilham Aliyev has today attended the opening of a new building of the embassy of our country in the Kingdom of Belgium in Brussels.

Axar.az informs that, Azerbaijani Ambassador to Belgium Fuad Iskenderov and designer of the building, Belgian famous architect Philip Vanhereveqe informed the head of state on the work done.

The building located on the Tervuren Avenue in Brussels was purchased by the Embassy of the Republic of Azerbaijan in the Kingdom of Belgium in 2014. The interior was repaired and the façade was refurbished. The building is in the vicinity of European institutions, near the Parmentier park, on the street where many diplomatic missions are located.

The Azerbaijani President cut the ribbon symbolizing the opening of the building.

The head of state got acquainted with the conditions created in the building. The entrance to the building is decorated with state symbols. There are photos of Azerbaijani carpets kept in the famous museums of different cities of the world, as well as a hand-woven carpet in the example of Tabriz carpet of 1870. Gobustan rock paintings are also included in the interior design. The first and second floors of the building are intended for the embassy's offices. Here, the ambassadors, advisers and other employees, as well as the staff of the consular service are equipped with all necessary equipment. In short, there are all conditions in the building for the employees to work efficiently. The building also houses embassy staff.

The Head of State posed for a photo with the employees of the embassy.

On May 14, President of the Republic of Azerbaijan Ilham Aliyev paid a working visit to the Kingdom of Belgium.