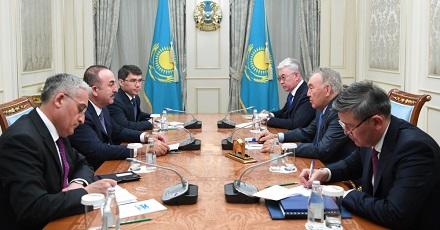 Turkey’s foreign minister announced Friday that the former president of Kazakhstan has been made honorary president of the Turkic Council.

"Founding President of Kazakhstan and wise leader of the Turkic world Nursultan Nazarbayev has become Honorary President ad vitam of the Turkic Council by unanimous decision of the Heads of State of all members upon proposal of President Recep Tayyip Erdogan," said Mevlut Cavusoglu on Twitter.

Cavusoglu tweeted from the Kazakh province of Shymkent, where he met Nazarbayev and President Kassym-Jomart Tokayev to discuss regional developments and bilateral relations.

The Cooperation Council of Turkic Speaking States, also known as the Turkic Council, was established in 2009 as an international intergovernmental organization with the aim of promoting comprehensive cooperation among Turkic speaking states.

During a meeting with Turkic Council Secretary General Baghdad Amreyev in Ankara on Monday, Erdogan said he shares Nazarbayev’s vision to reform the council and proposed that Nazarbayev, the "wise man of the Turkic world", should become honorary president of the council.

Erdogan also expressed his hope to see Uzbekistan as a member of the council and invited Turkmenistan President Gurbanguly Berdimuhamedov to attend the council’s annual meeting in Azerbaijan in October as a guest of honor.