Leyla Aliyeva at the exhibition "The masterpieces of history" - Photo 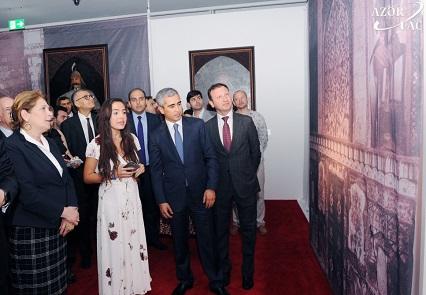 An opening ceremony of the exhibition titled "The masterpieces of history" was held at the Heydar Aliyev Center on May 27 in the National Museum of Georgia.

Fuad Akhundov, the head of the Department of Social and Political Affairs of the Presidential Administration, spoke about the importance of the exhibition. He noted that five years ago there were thousands of historical, cultural artefacts in Azerbaijan at the National Museum of Georgia. In this regard, President Ilham Aliyev and First Vice President Mehriban Aliyeva were informed and it was decided that a magnificent exhibition on these materials would be organized.

Thanking the Heydar Aliyev Foundation for organizing the exhibition, Fuad Akhundov noted that the Ministry of Culture and the National Museum of Georgia are working together to bring this work together. "Most of the pictures published at the exhibition have been restored. The National Museum of Georgia has accumulated these artefacts from the day it was formed and preserved it to this day. Therefore, I express my gratitude to Georgian colleagues, "he said.

Director General of the National Museum of Georgia, academician David Lordkipanidze said that ancient art samples presented at the exhibition can be regarded as masterpieces of Azerbaijani artists. He expressed confidence that the exhibition will gain the audience's sympathy.

It was noted that about 300 exhibits will be presented at the exhibition, which will last till October 6. The three sections featured antique Azerbaijani art, created from the Gajar dynasty, collection of household items and paintings from the Sardar palace complex of the Iravan Khanate and photographs from the archive of Russian photographer Dmitri Yermakov.