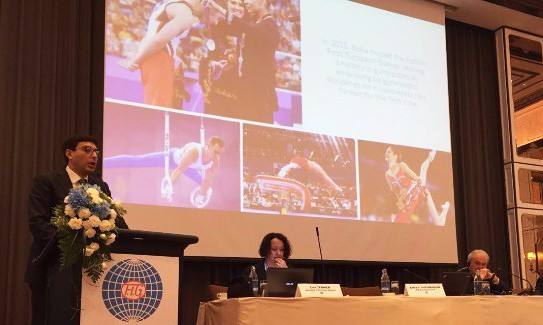 On May 7-8, Bangkok hosted the сouncil meetings of the International Gymnastics Federation (FIG).

During the meeting, Secretary General of Azerbaijan Gymnastics Federation (AGF) Farid Gayibov made a presentation in connection with the submission of Azerbaijan's candidacy to host the next FIG Council meeting in Baku, said the message posted on AGF website.

On May 6-7, 2017, FIG Council members will meet in Baku for the first time according to the Council's decision.

A draw was held during the meetings that determined the order of athletes' performances in the qualification of competitions of the gymnastics disciplines within the 2016 Rio Olympic Games, where Azerbaijan will be represented by three athletes (Marina Durunda - Rhythmic Gymnastics, Oleg Stepko and Petro Pakhnyuk - Men's Artistic Gymnastics).

FIG Council is the second important body within the FIG management structure (the first is the Congress), which is held annually in May.

The functions of the Council, which consists of 44 members, includes the consideration of the FIG President's report, approval of the FIG Executive Committee's actions, amendments to the FIG Technical Regulations, approval of annual financial statements, budget of competitions and others.

Baku will witness important decisions of the FIG's first Council of the Olympic Cycle 2017-2020.