Azerbaijani veterans will be handed over award 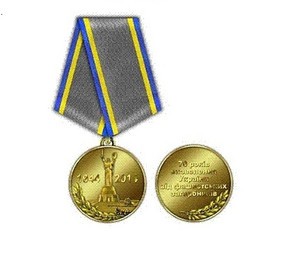 Azerbaijani veterans will be handed over the award of President of Ukraine.

According to the press service of the Ukrainian Embassy in Azerbaijan, to implement the Decree of the President of Ukraine on the establishment of the President award of Ukraine - the medal "70 years of Ukraine's liberation from Nazi invaders", at the request of the Ukrainian Embassy in Azerbaijan, the State Service for Mobilization and Induction intoMilitary Service in Azerbaijan in detail scanned archival materials and prepared the case on which the embassy is decorated more than 300 medals for the awarding of Azerbaijani war veterans who participated in the battles for the liberation of Ukraine.

Award ceremony will be held in Baku on May 13. By agreement with the State Service for Mobilization and Induction intoMilitary Service of Azerbaijan, awarding medals to veterans who live in other regions of Azerbaijan outside of Baku will take place in May-June.