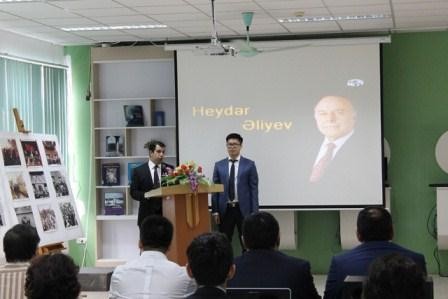 An Azerbaijani corner has been launched at the library of Vietnam State University in partnership with Azerbaijan`s Embassy in Vietnam. Students, lecturers, researchers, employees of the Center for Azerbaijani History and Culture Studies, representatives of Vietnam-Azerbaijan Friendship Organization attended the opening ceremony, which also marked the 93rd anniversary of national leader Heydar Aliyev.

In his remarks, Azerbaijani Ambassador Anar Imanov highlighted the country`s accomplishments under national leader Heydar Aliyev both in the Soviet era and in the years of independence. The Ambassador also touched upon Armenia’s military aggression against Azerbaijan, and Nagorno-Karabakh conflict.

Anar Imanov emphasized national leader Heydar Aliyev`s role in the development of Azerbaijani-Vietnamese ties. “National leader Heydar Aliyev’s visit to Vietnam in 1983 made a special contribution to the strengthening of the relations between our countries and nations.” He also said that Azerbaijani President Ilham Aliyev’s official visit to Vietnam in 2014 also played a huge role in developing relations between the two countries.

Head of the Center for Azerbaijani History and Culture Studies Dao Xuan Tien described national leader Heydar Aliyev as one of the world`s outstanding politicians.

The Embassy donated books on national leader Heydar Aliyev and Azerbaijan to the library.