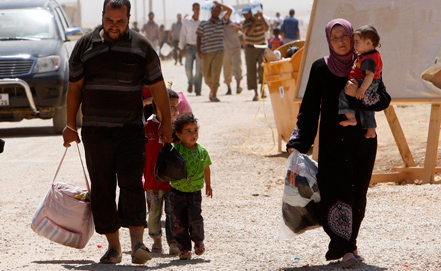 While suggesting that Norway was better prepared for a migrant crisis this time, Justice Minister Jøran Kallmyr has voiced a plan to place newcomers in tents to avoid projecting an image of luxury and sending the wrong signal.

Axar.az reports citing foreign media that Norwegian Justice Minister Jøran Kallmyr of the right-wing Progress Party has drawn parallels between the current situation and the 2015 migrant crisis when about a million asylum seekers entered Europe within a relatively short period of time.

“We do not look gently at Turkey's latest offensive. At the same time, Europe has almost become a hostage to Erdogan's politics. 3.6 million asylum seekers will create total chaos that Europe is not prepared for,” Kallmyr told national broadcaster NRK during his visit to the new Arrivals Centre, administered by the Norwegian Directorate of Immigration.

“We are trying to prevent them from coming to Norway, and let them stay in tents instead of hotel rooms. In 2015, we saw that they sent pictures to friends and said 'here it is luxury, you must come too'. It gave a completely wrong picture of Norway,” Jøran Kallmyr said.

“We need to monitor them and see if they have infectious diseases. Those rejected should be put on the plane quickly instead of residing in the reception center,” Kallmyr concluded.