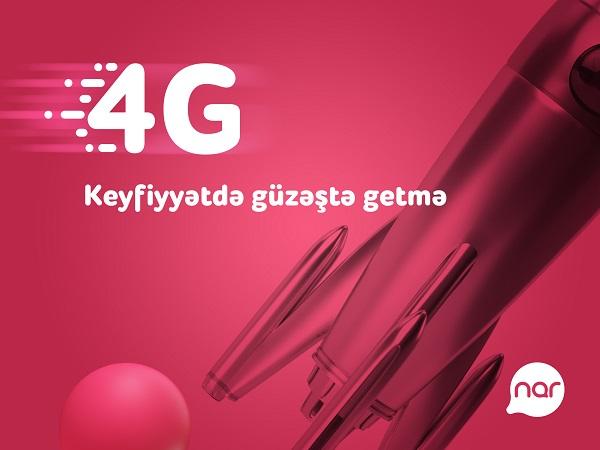 Providing high-speed and quality network across the country, Nar sees rapid growth in the number of 4G users.

Axar.az reports, thus, compared with the previous year, active 4G users of the mobile operator have soared by 85% in number, exceeding 875,000. As a result of high-quality mobile internet provided through base stations installed, Nar’s internet traffic volume has increased by 67%. Further penetration of 4G backed smartphones, expansion of LTE and LTE-A base stations and products designed to meet the needs of subscribers for internet have all contributed to the rapid growth of 4G users.

The increase in the number of 4G users, being 78% in Baku and 101% in regions was also led by the installation of LTE base stations in the capital city, as well as the regions, extending to most remote areas. Currently, the mobile operator has 67% of 4G users in Baku, while the remaining 33% are settled in the regions. It should also be noted that Nar installed its LTE base stations in 53 districts of Azerbaijan, covering 91,5% of the total population.

For more information about the network of the mobile operator, please visit our website at nar.az.

“Azerfon” LLC (Nar trademark) started its operations on March 21, 2007, and within a short period of time became one of the leading companies of the telecommunications and mobile communication industry of Azerbaijan. The ‘Nar’ brand name was selected as the symbol that resembles the cohesion of the rich cultural and historical heritage of Azerbaijan with the modern life. Being the first operator in the country to introduce the 3G technology, Nar provides the customers with a wide 4G network coverage. According to mobile network benchmarking tests, held in the year 2017, Nar network demonstrated the highest results in the country, in terms of provision of mobile voice services.