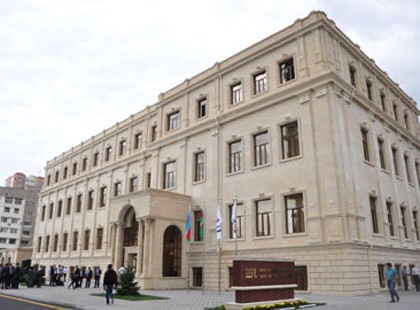 The Students of Baku Higher Oil School (BHOS) were awarded during the National University Students Information Sciences Olympics Winners Award Ceremony jointly organized by the Ministry of Communications and High Technologies (MCHT), Haydar Aliyev Foundation, Ministry of Education and Azerbaijan National Academy of Sciences Information Technologies Institute within the framework of the event dedicated to May 17, the Information Society Day, held by the MCHT and ADA University.

Public officials, as well as university rectors, representatives and students participated in the event. According to the results, Qafqaz University team became the winner, while BHOS team was the runner-up and Baku State University, Azerbaijan State Oil and Industry University and Azerbaijan Technical University teams shared the third place scoring the same points. The last fourth place was shared among the National Aviation Academy and ADA University.

The BHOS team members Rahim Mammadli, Mohayaddin Burhan and Ramziyya Garazade, the Process Automation Engineering sophomore students, were awarded diplomas on behalf of the MCHT, as well as the valuable gifts by HP, Azerfon and Caspian Telecom.

It should be noted that a total of 55 teams representing some 22 universities located not only in Baku, but also in the regions of the country, including the state universities of Nakhchivan, Ganja, Mingachevir and Sumgait, as well as Azerbaijan University of Technology took part in the Olympics which was a two-stage contest where thirteen most successful teams, each representing a different higher education institution, were qualified for the finals.