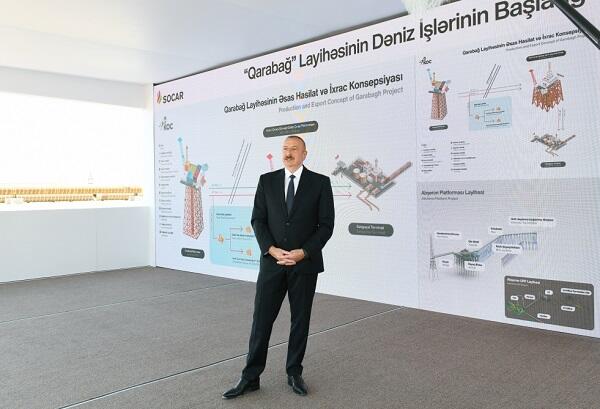 If everything goes according to plan, I think that in two years - at the end of 2022, the first gas and the first oil should be extracted.

Axar.az reports that, the statement came from President Ilham Aliyev in an interview with Azerbaijan Television on August 10 after the ceremony of launching the support block of the Karabakh field at the Heydar Aliyev Baku Deepwater Jackets Plant.

The oil potential of the "Karabakh" field is estimated at 60 million tons. But I am sure that this figure will increase during the development period. The reason for this is that the "Karabakh'' field is located near the "Azeri", "Chirag", and "Gunashli" fields, and the distance is not so great. I remember that when the contract for the Azeri, Chirag and Gunashli fields was prepared in 1994, foreign partners estimated the potential of these fields at 511 million tons of oil. But life has shown it, and today it has been confirmed that the potential of the "Azeri", "Chirag" and "Gunashli" fields is more than 1 billion tons of oil. Therefore, these and other geological factors give grounds to say that the "Karabakh" oil field has a larger amount of natural resources. As for production, the field will produce at least 1.5 million tons of oil and 1.5-1.8 billion cubic meters of gas a year. "Of course, it will be of great benefit to keep oil production stable and increase gas production in Azerbaijan," Ilham Aliyev said.