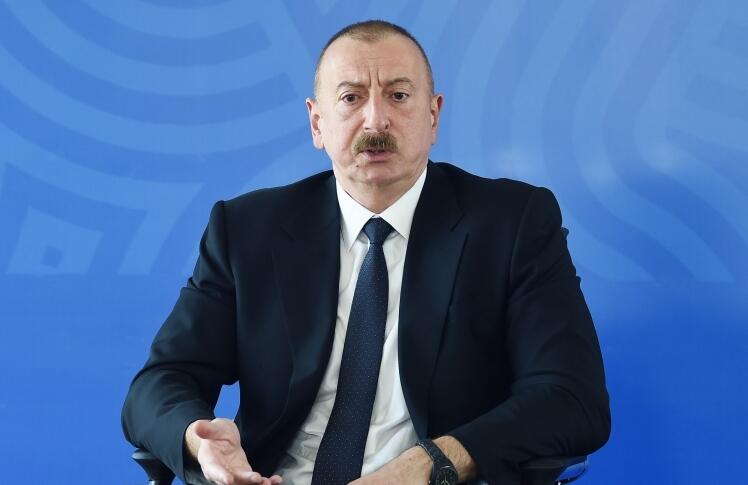 The nonsense voiced by the Armenian Prime Minister last year dealt a serious blow to the negotiation process. By saying "Karabakh is Armenia", he not only spread the lie all over the world, and this continues, but also makes the negotiation process meaningless. If he thinks that Karabakh is Armenia, then what can we talk about? If he thinks that Karabakh is Armenia - although the whole world has rejected this nonsense - then what kind of peace agreement can we talk about? That was a political provocation.

Axar.az reports that, the statement came from President Ilham Aliyev in an interview with Azerbaijani TV channels after the groundbreaking ceremony for the Absheron field offshore at the Baku Deepwater Jacket Plant.

According to the President, Yerevan resorted to a second political provocation, claiming that Azerbaijan should negotiate with Nagorno-Karabakh, not Armenia:

"It also means changing the format, and of course we can never agree to that. Because we have no contact with this toy criminal junta regime. At the same time, the co-chairs of the Minsk Group, of course, could never agree to this.

In fact, these statements give grounds to say that Armenia has withdrawn from the talks, not us, but Armenia. In this case, let's stop and say that let's start negotiations or continue, it will just be irresponsible, and we should not deceive ourselves, we should not deceive our people. Negotiations are not going on, and this is not due to a pandemic. Of course, the pandemic has intervened, but without the pandemic, negotiations will not take place. These politically flawed and harmful statements leave no room for negotiations.

It is a crime to bring people to the occupied territories and settle them illegally. The Pashinyan regime is doing this consciously. This is a provocation. We are provoked, they show it on the Internet - some Lebanese-Armenian family has come and is doing something there. After that, in the ancient historical city of Shusha, the so-called black leader of that so-called regime is allegedly sworn in. This is another provocation. This is an open insult to us. Do they think we can handle it? Who is doing this provocation? They are. We do not commit any provocation. We have stood our ground."