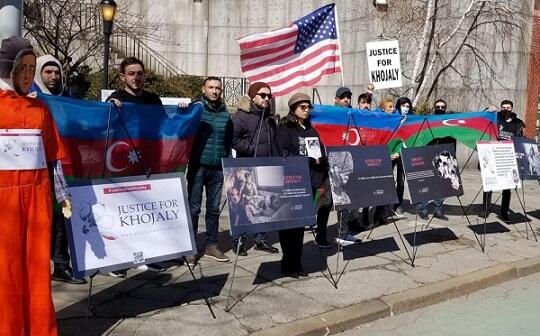 An exhibition of photos depicting the horrors of the Khojaly genocide was held in front of the United Nations Headquarters on the island of Manhattan in New York. The exhibition was organized by the Azerbaijan-New York Association with the support of the State Committee for Work with the Diaspora.

Axar.az reports that the State Committee for Work with the Diaspora told that the exhibition titled "Justice for Khojaly" featured photos of people brutally killed by Armenians during the genocide.

A special car with digital posters reflecting the truth and historical facts about the Khojaly genocide, the most horrible crime in human history, was brought to the area. The exhibition attracted the attention of the US public, local media, diplomats in the area, and residents passing by in cars. They approached our compatriots and received information about the Khojaly genocide.

Chairman of the Azerbaijan-New York Association Erjan Yerdalanli and active Azerbaijani youth living in the United States informed the participants about the genocidal policy pursued by Armenians against Azerbaijanis throughout history, their crimes against humanity in Khojaly, including infants and adults.